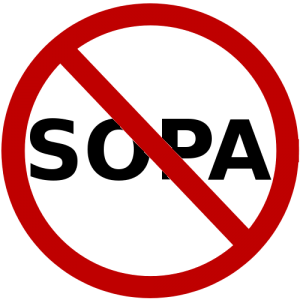 Feel free to copy-and-paste to use in your own letter. You’d have to rewrite it a little, but it should help. Find your representative in the house and tell them to stop this when Congress is back in session after the winter recess.

The “Stop Online Piracy Act,” or SOPA, gives corporations the power to blacklist websites at-will and it violates the due process rights of the thousands of Internet users who could see their sites disappear.

This bill (HR 3261) was intended to discourage illegal copyright violations, but it addresses this problem by giving corporations far too much authority over free speech on the Internet. It deputizes the private sector with broad powers to disconnect the URLs of any website corporations contend are behaving improperly. We can’t let corporations become the Internet’s judge, jury and executioner.

SOPA not only lets companies silence websites but also allows banks to freeze financial deposits to the accounts of website owners, potentially forcing falsely accused Internet enterprises out of business. The bill was intended to discourage illegal copyright violations, but it addresses this problem by giving corporations way too much authority over the way the Internet works. It deputizes the private sector with the power to disconnect the URLs of any websites corporations contend are behaving improperly.

These are the sorts of heavy-handed Web controls you’d expect to see in China, not in the United States.

It gives private entities unprecedented power to rewrite the Internet’s domain name system (DNS), which translates your website request into an IP address to connect you to the correct location. After receiving a complaint from a company like Viacom or Sony Music, the government can force Internet providers and search engines to redirect users’ attempts to reach the websites that they choose. As such the consequences for free speech would be grave. The bill not only gives record labels the authority to “disappear” content from the Web but could also land someone in jail, where they would face severe penalties and a long prison term.

The idea that SOPA would protect against online piracy and other Web crimes is a Hollywood pipe dream. As a technical solution, redirecting DNS would be virtually useless in stopping sophisticated online piracy — but it would have a strong deterrent effect on casual producers and consumers of Internet content. I work for an entertainment company that provides digital mediums for major celebrities, such as Justin Bieber (who has publicly rejected this bill), Mike Tyson, 50 Cent, and Pauly D (MTV). Pioneers of the modern Internet, including Tim Berners Lee, the creator of the first website, and Dr Paul Mockapetris, inventor of the modern domain name system (DNS), have publicly rejected this as well.

Opponents of the bill include Google, Yahoo!, Facebook, Twitter, AOL, LinkedIn, eBay, Mozilla Corporation, the Wikimedia Foundation, and human rights organizations such as Reporters Without Borders, the Electronic Frontier Foundation, the ACLU, and Human Rights Watch. On December 22, Go Daddy, the world’s largest domain name registrar, stated that it supports SOPA. This prompted users from Reddit to organize a boycott. In addition, Jimmy Wales announced he would transfer all Wikimedia domains from Go Daddy. The same day, Go Daddy rescinded their support, with its CEO saying, “Fighting online piracy is of the utmost importance, which is why Go Daddy has been working to help craft revisions to this legislation – but we can clearly do better… Go Daddy will support it when and if the Internet community supports it.”

House cybersecurity subcommittee chairman Dan Lungren (CA-R, Folsom) told Politico’s Morning Tech that he had “very serious concerns” about SOPA’s impact on DNSSEC, adding “we don’t have enough information, and if this is a serious problem as was suggested by some of the technical experts that got in touch with me, we have to address it. I can’t afford to let that go by without dealing with it.”

Congressman Miller, if you are confused by any technicalities that are being introduced to you in congress, I personally would like to clear this up with you at your Mission Viejo office. Our representatives in the House who are dealing with this bill don’t get it. Concerns about SOPA have been raised by the Tea Party, progressives, computer scientists, human rights advocates, venture capitalists, law professors, independent musicians, and many more. Unfortunately, these voices are not being heard. We can’t let corporations become the Internet’s judge, jury and executioner. If SOPA is allowed to stand, we could see the private sector’s police powers expand to a point that undermines the fundamental openness of the Internet. SOPA violates our right to free speech. Please vote “no” on SOPA. It puts the open Internet at risk.